In the following, we describe a custom variable problem. The variable is a string with a fixed length in our case. However, we formulate the problem to be easily extended to have a variable length. The objective function looks as follows:

The problem definition above defines a problem with just one variable. This variable can be considered a complex object, which is, in our case, a string. The same principle can be used to use other data structures such as trees or lists with variable lengths. Because both objectives have to be maximized, we are minimizing their negative values.

To solve the optimization problem, evolutionary operators sampling, crossover, mutation, and duplication, check needs to be implemented. Each of the modules will be shown in the following.

Our sampling method just generates a random string, which is equivalent to choosing a random letter from the alphabet (only lower case). Because of the implementation of having only one variable, we return a matrix with the shape (n,1).

The mutation needs to be implemented for our string object as well. We either change the order of the string (40%), randomly pick a new character with a given probability (40%), or leave the string unmodified (20%).

Moreover, do not underestimate the importance of filtering out duplicates during evolution. Duplicate elimination helps to make sure a mating produces an offspring that does not already exist in the current population. If it does, another mating process is triggered until unique individuals do exist.

Finally, we create an algorithm object with all the modules defined above. 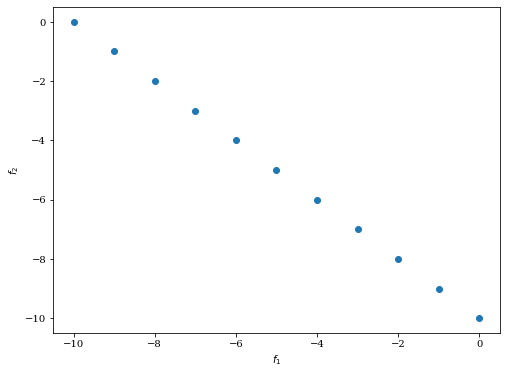