In the following, we investigate exemplarily a bi-objective optimization with two constraints. We have tried to select a suitable optimization problem with enough complexity for demonstration purposes, but not too difficult to lose track of the overall idea. Its definition is given by:

As already discussed in the Preface, let an optimization problem be defined by:

The the example problem to be solved in this getting started guide is given by:

Next, we derive the optimum for the given optimization problem. It is worth pointing out that this is not a requirement for pymoo and is just done for verification purposes here. Moreover, this is a valuable exercise to understand the design and objective space mapping.

The figure below shows the problem’s functions in the design space and might help to see the relationship between the functions intuitively. The contour lines of the objective function \(f_1(x)\) is represented by a solid and \(f_2(x)\) by a dashed line. The constraints \(g_1(x)\) and \(g_2(x)\) are parabolas which intersect the \(x_1\)-axis at \((0.1, 0.9)\) and \((0.4, 0.6)\). A thick orange line illustrates the Pareto-optimal set. When considering both constraints together, the Pareto-set shown in orange is split into two parts as analytically derived above. 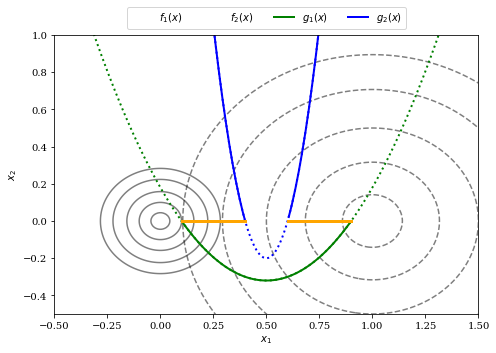 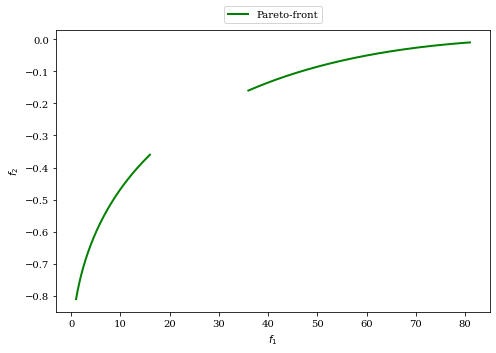 As a quick check, we shall verify if this is a non-dominated set. Keeping in mind that the first objective is minimized and the second maximized for this optimization problem, a better solution lies on the top left. This means the derived Pareto-front makes sense.

Researchers have developed all kinds of test problems and derived their optima from designing and comparing suitable optimization algorithms. However, deriving the Pareto-set and Pareto-front from a mathematical problem formulation can become quite challenging for more complicated problems or not even be possible. Also, not all algorithms can be put into a math equation and might be of a black-box nature. Thus, we use optimization algorithms to find (near-optimal) solutions using well-benchmarked algorithms.