In 2016, Deb and Abouhawwash proposed Karush Kuhn Tucker Proximity Measure (KKTPM) [19], a metric that can measure how close a point is from being “an optimum”. The smaller the metric the closer the point. This does not require the Pareto front to be known, but the gradient information need either be available or be approximated. Their metric is applicable to both single objective and multi-objective optimization problems.

Let us now see how to use pymoo to calculate the KKTPM for point:

For instance, the code below calculates the KKTPM metric for randomly sampled points for the given example;

Moreover, a whole rum of a genetic algorithm can be analyzed by storing the history of each generation and then calculation the KKTPM metric for each of the points: 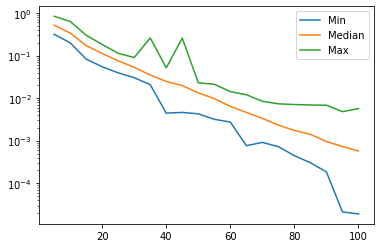